Such an awesome story about a boy befriending a Native American, living of the land, never giving up to save his cousin from another Native American tribe. Shows there is good and bad people no matter what nationality.

We loved reading Zeke and the Fisher-Cat. We have been teaching our children about loving all of God’s chidden and this is a book that shows a friendship that does that. We loved reading this book out loud.

This story follows Zeke, a young teenager as he heads west with his uncle and cousin to start a homestead while his uncle teaches at the school. Within his hard work he befriends a native boy and this story covers there friendship across the different cultures. It contains hard work and a good, strong example for boys.

One caution though: with the tension in America right now, this story does depict a couple of the different native tribes and one tribe is ready to go to war against other tribes and the owanux aka the white man. I think the term savage was used once to refer to the savage behavior of the hunger for violence and war.

The Most Unlikely Friendships are Often the Best Ones

The whole family enjoyed this story of courage, kindness, and friendship!

Zeke and the Fisher-Cat is a wonderful story of friendship with some adventure thrown in. It is positive, uplifting, and wholesome.

Fourteen-year-old Zeke and his family leave the Plymouth colony to build a new life in the wilds of Connecticut. When Zeke and his younger sister are captured by Pequots, Zeke wonders if his new Mohegan friend, Nemox, will prove loyal. Follow the adventures or Zeke, his Native American friend, and the fisher-cat that they find in the forest.

“We are so pleased to be bringing back some books by Virginia Frances Voight, an author whose writing is truly ‘good and beautiful,’ featuring high literary, moral, and educational value. Books like this one can get even reluctant readers interested in worthy books.”—Jenny Phillips 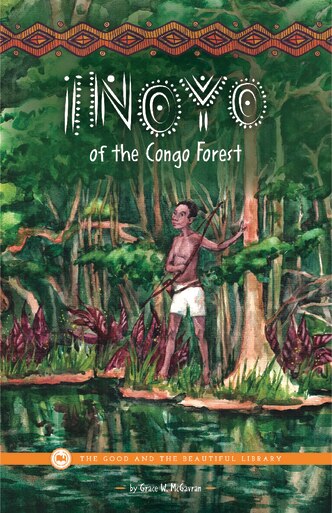 Inoyo of the Congo Forest by Grace W McGavran

His Indian Brother by Hazel Wilson

The Falcon of Eric the Red by Catherine Cate Coblentz

Daniel and the Drum Rock by Florence Parker Simister